The wide variety of jobs available in the transportation engineering field has further expanded thanks to incorporating innovative uses of machine learning and other big data tools with transportation data sets.

In the case of Institute for Transportation (InTrans) recent doctoral graduates, particularly those who worked with the Real-Time Analytics of Transportation Data (REACTOR) Laboratory, the breadth of career paths may even surprise fellow graduates.

A sampling of the jobs that recent REACTOR Lab graduates landed include the following: 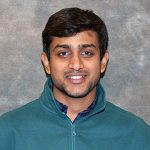 Bharath Chandra Anumukonda worked on a variety of technologies during his time at InTrans, which helped him quickly adjust to the world of tech stack at Amazon.

Tech stack is the variety of interconnected technologies and software required to develop something like a mobile application. In addition to working with a variety of technologies while at InTrans, Anumukonda also learned a lot about the end-users’ needs by providing solutions to the Iowa Department of Transportation (DOT) on those projects.

“Having control over the end-to-end on projects, starting from design, development, and then checking results helped me to confidently take up challenges at Amazon,” Anumukonda said.

Anumukonda spent two years honing his skills in the field of full-stack software development while at InTrans and joined Amazon in February after receiving his doctorate at Iowa State.

His work at InTrans including working on automating and simplifying existing processes; migrating the infrastructure and processes to the cloud; and serving as the joint Amazon Web Services (AWS) administrator and thus planned, created, and allocated resources for others to work on their projects.

“Bharath was not only a good developer but a had excellent social skill and an amazing team player. We were fortunate to have him on our team,” Sharma said. 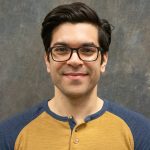 Saeed Arabi is taking the lessons he learned while at InTrans and starting his own company, Salin 247 Inc.

Arabi’s focus at InTrans was in developing applied deep learning and computer vision solutions for monitoring civil infrastructure and deploying those solutions on embedded sensor systems.

“I’ve learned the principles of coding and working with different types of sensors and embedded devices, which was essential for my job,” Arabi said.

His new role is in developing the software for the company that designs lightweight, autonomous farm equipment.

Arabi joined InTrans in 2017 and defended his doctorate in April.

“Saeed is an innovator and entrepreneur. He had a clear vision of what he wanted to do after graduation and pursued his dreams since the start,” Sharma said. 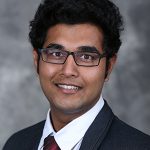 Ashirwad Barnwal spent six years at InTrans learning about the intersection of transportation, statistics, and programming.

His knowledge in those intersecting fields helped him secure a job at American Family Insurance as a data scientist upon completion of his doctorate at InTrans in April.

“If there is one thing that I can say about InTrans, it is this: The past six-plus years that I have spent at InTrans are some of my best years, and InTrans is undoubtedly one of the best places in the world for transportation research and education,” Barnwal said.

Barnwal worked on a variety of projects at InTrans. His projects included trying to quantify the crash risk of vulnerable groups of road users such as older drivers with vision and cognition problems and drivers with diabetes, as well as working on problems involving the development of a visualization tool to help the Iowa DOT streamline its winter maintenance efforts by developing crash models, among other tasks.

“Ashirwad is an independent thinker and always tries to explore multiple solutions to identify the best approach to solve a problem. He was also among the most organized coder in our group and created several reusable codes which we will continue to use in our development,” Sharma said. 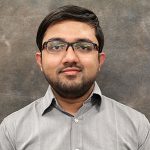 A.M. Tahsin Emtenan focused on traffic operations and control during his time at InTrans, which translated well to a job working as a traffic analyst at HDR, Inc., a major design firm that specializes in engineering, architecture, environmental and construction services.

Emtenan’s main responsibilities in his new role—he joined the firm in January—include traffic signal timing design, transportation data analysis, dashboard development, and simulation modeling, all of which he worked on while at InTrans.

Most of Emtenan’s work focused on traffic signal timing. He worked with INRIX data and automated traffic signal performance measure (ATSPM) data sets, which prepared him to analyze large data sets in his current role. He also used simulation and capacity modeling on the ATSPM data sets.

“All these experiences prepared me well for carrying out my responsibilities at HDR,” Emtenan said.

Specifically, Emtenan focused on three projects sponsored by the Iowa DOT and National Cooperative Highway Research Program (NCHRP) during his tenure at InTrans that began in spring 2018. The Iowa DOT projects were related to ATSPMs, and the NCHRP project included developing right-turn-on-red volume and capacity estimation models for the Highway Capacity Manual (HCM).

“Tahsin made some valuable contributions to the projects he worked on while he was here, and the work he did for NCHRP fills a significant gap in practice that has existed for many years. I’m excited to see him take the next steps in his career,” Day said. 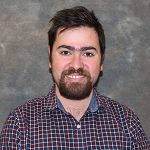 Arya Ketabchi-Haghighat had been studying engineering for years when he found his true passion in the subject thanks to the emerging technology of deep learning.

“I found this topic something new in which I could make big steps,” Ketabchi-Haghighat said.

He’s been making those big steps ever since he began studying applications of deep learning in engineering problems. He’s made these strides both at InTrans and since graduating with his doctorate in March.

Shortly after graduating, Ketabchi-Haghighat joined HRL Laboratories, a research laboratory owned by General Motors and The Boeing Company that does research and development for the two firms. HRL Laboratories has been leading on emerging technologies, including the invention of the laser in 1960.

“My new role at HRL is as a computer vision and deep learning research scientist, and I deploy similar techniques that I learned during my PhD to help these companies have more reliable products,” Ketabchi-Haghighat said.

Ketabchi-Haghighat’s thesis included a comprehensive overview of applications of deep learning in intelligent transportation systems (ITS) and a summary of three research projects he worked on while at InTrans.

Those projects resulted in improved the performance of a transportation data set, better detection of wrong-way driving on highways, and developing deep learning models that analyzed video of drivers to determine whether their behavior was within a normal range.

“Arya was a really motivated and hardworking data scientist. At times, I pushed him to problems no one has touched before and he always came back with very interesting insights and possible solutions,” Sharma said. 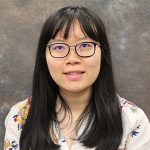 Jia Wen “Esther” Tang came to InTrans in the summer of 2021 without any prior knowledge in civil engineering, but that did not stop her from tackling transportation challenges with enthusiasm.

The knowledge that Tang gained and her willingness to learn helped the InTrans graduate to secure a job as a database developer at the Federal Home Loan Bank of Des Moines. She will begin next month after graduating with a master’s degree this month.

Her background in information systems were invaluable resources as Tang worked on projects that helped build her skills in statistical modeling, creating visualization tools, and maintaining databases.

“I think being curious, having the willingness to learn, and trying new things are essential, as I joined InTrans without prior knowledge in civil engineering or transportation, but I am thankful for my supervisors, Zach [Hans] and formerly Hossein [Naraghi] for investing time in sharing their knowledge with me,” Tang said.

While at InTrans, Tang worked on a variety of tasks to help a range of projects through the REACTOR Lab.

“Esther made incredible contributions while at InTrans, and the results of her efforts are already being used to improve traffic safety in Iowa, in the areas of both enforcement and engineering. I appreciated how she approached new tasks and problems, even those outside of her area of expertise. She wasn’t afraid to ask questions and was open to feedback, which I think really enhanced her technical skills,” Hans said.

Added Naraghi, “Esther has shown enthusiasm to learn new material and was patiently listening and following directions to complete challenging tasks. She clearly demonstrated professional ethics and set a perfect example for other research assistants to follow. The results of her efforts are being used by various engineers and safety professionals to make data-driven decisions in the field of transportation safety.”